Rabiah York Lumbard is an award-winning author of the picture book The Conference of the Birds (Wisdom Tales, 2012). Her latest picture book, The Gift of Ramadan (Albert Whitman, 2019) was highly recommended by SLJ as "a perfect addition to holiday book collections," while her deeply personal debut novel No True Believers (Crown, 2020), which draws on her experience as an American Muslim at home and abroad has been hailed by Booklist as "taut debut novel" and "a page-turner that carries a message of radical love, regardless of faith." She is also the 2015 winner of the Middle East Book Award for her picture book When the Animals Saved Earth. This multicultural environmental tale is inspired by a 1,000-year-old animal fable from 10th century Muslim Iraq that was originally translated by a Jewish rabbi at the command of a Christian king in the 14th century. Her interfaith book Everyone Prays: Celebrating Faith Around the World received the Eric Hoffer Award in 2015.

Alexis/Rabiah grew up in Northern Virginia, a place she still calls home. After embracing Islam at the age of eighteen, she earned a BA in religious studies from George Washington University and is completing her MFA in creative writing at Spalding University. While not raising her three daughters or plodding along with her latest draft, she also works as a part-time writing specialist at local universities. Her work has been written up in PBS Kids, BBC Persia, the School Library Journal and more. Favorite pastimes include rescuing cats and riding bikes with her little women. 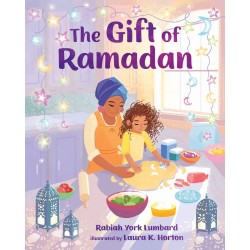 The Gift of Ramadan