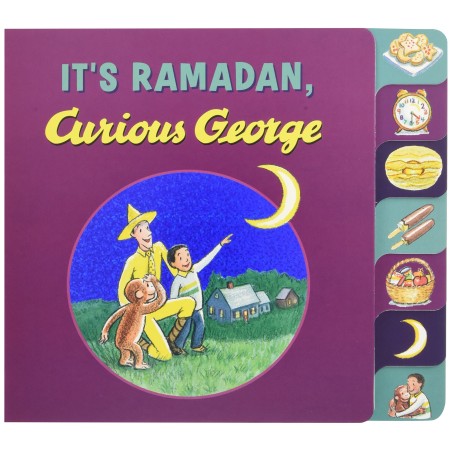 It's the first day of Ramadan, and George is celebrating with his friend Kareem and his family. George helps Kareem with his first fast and joins in the evening celebration of tasting treats and enjoying a special meal. Then, George helps make gift baskets to donate to the needy, and watches for the crescent moon with the man in the yellow hat. Finally George joins in the Eid festivities to mark the end of his very first Ramadan. This playful tabbed board book, with a foil-stamped cover, makes a great holiday gift for all fans of Curious George—those who celebrate Ramadan, and those who are learning about it for the first time!

It’s a tabbed board book with 7 tabs.  The first tab titled “A Special Month” talks about how ramadan will start tomorrow and the preps everyone is doing. The next tab is about the “Day of Fasting”, which follows Kareem and George as they wake up for suhoor. It’s about keeping busy when you’re hungry. This is followed by “Waiting fun Sunset” where everyone gathers together and waits for Iftar. The author hasn’t actually used the words “suhoor” and “iftaar”, instead it is an “early meal” and “time to break fast”. Then comes “It’s Dinnertime”, which shows a people coming together to eat food from various cultures like kabobs, curry and a pizza! They also had a treat for Kareem’s first fast! “Sharing with Others” is the next page on which Kareem invites George to the mosque where they are holding a Food Drive. George being George thinks all the shelf of shoes in the mosque is for donation. The imam laughs and says that next year they can have a clothes drive. The next tab is “Spotting the Moon” where Ramadan is over and they look at the crescent moon that announces that Eid is the next day. Kareem gives George a fancy vest and a yellow fez for the man in the yellow hat. The last tab “An Eid Celebration”, is about how everyone is dressed up (illustrations show various cultural clothes), and feasts and have fun together at the masjid. The story ends with George going back home and thinking of how his first Ramadan had gone.

*The illustrations are similar to the classic Curious George stories, and not the newer PBS kids show one

Overall, while it’s a board book it’s geared more for the 4+ age group. It’s actually a great book for all elementary kids, and I would highly recommend it. The author doesn’t talk about religion, or WHY people fast, or use any Arabic words. It’s just about Ramadan and HOW muslims celebrate it as part of the American/western lifestyle. That makes it very appropriate for the age group. Also it’s one of those books I would send in Ramadan gift baskets to neighbours/co-workers, or into a child’s classroom so that teachers can share with the class. 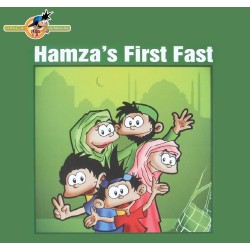 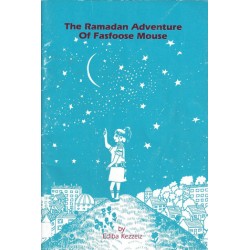 Badir and the Beaver

What if My Kitty Fasts in...

Mustafa and Arwa go on a...